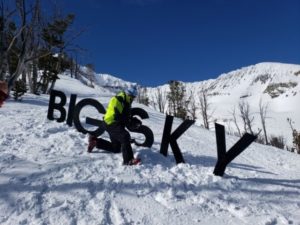 A little over a year ago, financial advisor Christopher Bentley was ready to leave for a long-prepared for ski trip when he received a life-changing phone call.

Bentley, a private wealth advisor and vice president of Bentley, Kroyer & Associates, an advisory practice of Ameriprise Financial Services in Wayzata, Minn., had planned for nearly a year to visit Montana’s Big Sky Resort with family and friends.

Then a client, Travis, called him, telling him that his wife Katie had died. Bentley immediately realized that his ski vacation would conflict with Katie’s memorial and life celebration.

“Losing Katie was hard enough. The thought of not being able to attend the service was inconceivable,” said Bentley. “I wanted to be there to honor her amazing life, with her huge posse of amazing friends, and to be there for Travis and the boys. I couldn’t cancel the trip because we were hosting our friends; I decided I would simply bow out and leave the hosting duties to my wife. What else could I do?”

A few days later, when Bentley explained to Travis over lunch that he was canceling his ski trip to come to Katie’s memorial, the response took him by surprise. Big Sky was one of Katie’s favorite places on the planet.

Travis and Katie weren’t just any clients, said Bentley, who became an advisor in 2008 after careers in the military and various food and beverage industries. They came to him in 2012 as young 30-somethings working for Target (whose corporate offices are in the Minneapolis area) while he was with RBC Wealth Management, and later followed him to Ameriprise.

“They were young and had two young children, and she was healthy at the time,” he said, describing his first meeting with them. ”There was a fire alarm two minutes after our meeting started – the worst timing – and at that point, they were just prospects, they hadn’t moved anything to me. I said that we should go to a coffee shop, and we did, and we just talked.”

The couple had some rollovers from previous jobs—but not much, said Bentley—and wanted to talk about 529s for their children’s education. “I’ll never forget one thing that they asked, ‘We don’t have much, why would you want to work with us?'”

“I could tell in one hour that they had the right mindset, the right attitude, and at their age they were asking very mature questions, and that meant that I could provide them and their family value over the years. They just got it. We were a good fit.”

The couple also stood out to Bentley because “they were so in love with each other,” on the same page about everything, which he said is unusual even in partners and spouses with many decades of marriage behind them.

When Katie turned 32, two years into their working relationship with Bentley, she experienced a serious recurrence of breast cancer. She brought a life-changing question to a client meeting.

“She was still healthy, but she didn’t know what her future held, and she asked me ‘do you think I should keep working at Target?’” he said. “I asked her what the alternative was, and she said ‘I would like to be a barista for a while.’ If her time was limited, she didn’t want to spend it at Target.”

Realizing that Travis’s income at Target was sufficient enough to be a principal breadwinner, Bentley gave Katie his blessing to leave her career and work as a barista—where “she had the time of her life. She was so personable that everybody who met Katie became her friend, and she made a lot of them while she was a barista. And it gave her some fabulous years at home with her boys.”

A few years later, when her cancer began to metastasize to her lungs and brain, Katie would tell Bentley that the advice to quit her corporate job to become a barista was “the best advice I ever gave her,” he said.

Around age 35, Katie couldn’t work anymore due to the burdens of her chemotherapy treatment and a desire to be a full-time mom to her children.

At age 38, she began planning a new home for the family, often working from her bedside, knowing that she wouldn’t be able to live in the new house. But she still wanted to have her creative spirit as part of the home.

Then, at age 40, Katie died, leaving Travis and their two sons behind.

Bentley still tears up when he talks about Travis’s request at that lunch to take Katie to her resting place at Big Sky.

He met with Travis the next day to carefully pack her ashes into his backpack and share a hug before leaving for Montana.

Upon arriving at Big Sky on a beautiful day and greeting his guests, Bentley told them about what he was asked to do for Katie.

“The trip became our mission,” he said. “To reunite Katie with Big Sky. Everyone wanted to be a part of it.”

Up Calamity Jane, a popular Big Sky run, Bentley went with Katie’s ashes, to a photogenic spot on the knoll where large, raised letters spell out “BIG SKY,” with the resort’s majestic bowl spread across the background.

With the usually busy spot to themselves, the group solemnly assembled with GoPro cameras and smart phones, where Bentley carefully buried Katie’s ashes in front of the letter “K.”

“I asked God to accept Katie’s ashes,” he said. “I told him what a wonderful person she was, and how much she would be missed. He already knew this, but listened to me anyway. It was a beautiful, extraordinary moment in our lives—just as Katie would have wanted.”

Bentley and his guests produced a video for Travis and sent it to him for Katie’s life celebration, which was attended by more than 600 friends and family.

“Travis had told me that there would be so many people there that there was a good chance he wouldn’t see me anyway,” said Bentley. “Like I said, pretty much everybody who met Katie became her friend.”

Travis and the children moved into the new home that Katie helped design, and all are doing well, said Bentley. Not only has Travis remained a client and friend, but he’s also joined the board of a non-profit founded by the advisor, “Wings for Widows.”

Wings for Widows provides financial coaching, education, and other transitional services for recently widowed individuals. Bentley founded the organization after a colleague at Ameriprise passed away and Bentley, working with his widow, began to realize how few resources were available to widows struggling with grief and the practical matters of losing a spouse.

“Travis wanted to join our board, and this means we’ll get to hang out a lot more,” said Bentley. “As a widower, he also brings that experience to our team. He’s been down that road. How many other advisors have somebody like that?

“To this day, I am grateful to have had the opportunity to take Katie back to Big Sky, back to the mountaintop and a little closer to heaven.”